Like many other kids in my generation, I had a sticker collection. Because how great are stickers? You start with a boring, blank area, put a sticker on and it BOOM! huge improvement. It transforms into something interesting, something you want to look at, maybe even a work of art (unless the sticker is of a Garbage Pail Kid, in which case you are just an 8 year old boy from the 1980s who likes to gross people out). 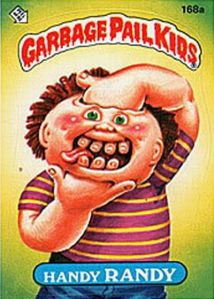 I eventually grew out of my sticker collection phase and entered into my obsession with beauty products. One of the first products I was allowed to use was nail polish. And use it I did. It wasn’t unusual for me to have a different color on each nail and new colors every other day. My previously mentioned adult issues with nail polish–not enough time in the day, chipping issues–did not matter to a 12 year old who had all the time in the world (at least after school was out) and changed polish before it had a chance to chip.

My one issue at the time was my teeny tiny nail beds. While everyone else was painting hearts, Christmas trees or the lyrics to “Back That Ass Up” on their nails, I struggled to find space for even a tiny star. My toddler-sized nail beds meant I couldn’t go the nail salon and have wonderfully trashy designs airbrushed on my nails, like some of my high school friends did. How jealous I was of the girls with broad, healthy nail beds! To compensate, I grew my nails super long, prompting my best friend Danielle to name them “little chefs’ hats.” At their peak, the whites of my nails were three times as long as the nail beds. Sixteen year old Allison considered this an accomplishment.

Fast forward ten years. I read about Minx Nails in Allure and thought “I need these.” Minxes are flexible films that shrink wrap to the natural fingernail. They are basically stickers for the nails, marrying my childhood obsession with my teenage years obsession. Don’t you love a clean storyline like that? Minx wraps come in a huge variety of colors and patterns and are custom fitted to your nails. So all nail beds can be decorated, regardless of size! The product promises to stay on for up to 10 days, with no possibility of smudging. I badly wanted to be Minxed, but it required around $60 and a visit to a nail tech. At the time, I was in Esthetics school and waitressing, so my disposable income was roughly $0.31 per week. Hoping for a windfall, or a month of 70% tips, I ripped that article out and filed it in my “Beauty Wishlist” folder. And then I forgot about it…

…until last year. Sally Hansen, the monopolizer of drugstore nail care, came out with Salon Effect Real Nail Polish Strips. (I know other lines carry similar products and they may have been out prior to last spring, but bear with me here.) The Salon Effect Strips are at at-home process, with no dry time and 24 colors and patterns to choose from. And they only cost about $10 per pack. I was sold.

First I tried the “Laced Up” pattern, a pretty black and white design that looks like lace (duh). The package includes 16 pre-sized nail strips which are supposed to fit all nail sizes. Hmmm, not all sizes, Sally Hansen. Some adults have the nail beds of an 18 month old. Luckily, this is nothing a good pair of nail scissors can’t fix.

I cut the nail strips to my size, then went to work applying them. (If you are going to do this, make sure you don’t have any nail polish on. The strips won’t adhere to anything but a bare base.) They are pretty easy to apply–you just pull the backing off the strip, press down onto your nail and smooth out. Because the strips are way longer than even my high school nails, you have to file off the excess strip (with the file that comes in the kit). Once you do this ten times, you are done. No top coat, no buffing and best of all, no dry time. The actual application can take a while, especially the first time you do it, but it’s something you get used to after a couple times.

The Sally Hansen Salon Effects strips did not chip from wear and tear. The only downside was that after a week or so, the sections closest to the base of my nails began to lift. So when I’d put my hair up, strands would sometimes get caught under the strips, pulling them up more. I could usually press them back down a little. But after repeatedly catching on a strand, sometimes a bit of the strip would come off. At that point, I would remove them. I usually just peeled them off–making nail techs across the country cringe–but I did remove what was left with nail polish remover. That worked well, no soaking or elbow grease required.

The strips come in a sealed plastic packet and they do dry out after a while once the packet is opened. I found this out when I went to apply some “Misbehaved” (a fishnet pattern) a month after I had opened the pack. I had already used them as a full manicure the previous month and they worked great. I then eventually painted my nails with a regular polish, and when it started to chip, I thought I could patch over the chips with pieces of Misbehaved strips (this was me rebelling against the “no polish before you apply” rule). I figured with a little lash glue and some ingenuity, I could make it work. But when I went to apply small pieces that I had cut out, I found that they had dried out and lost any adhesiveness. So although I think I should get points for a decent idea, apparently the strips have a shelf life once opened.

Overall, I have to say I friggin’ love these things. No dry time, I get to finally! have designs on my nails, easy removal process and I find $10 to be very budget friendly. I just bought some new ones–blue and silver glitter on a black base–called “Winter Funderland,” and I can’t wait to use them.

I have one more nail product I love, coming up in Part 3….

Have a beautiful day 🙂

This site uses Akismet to reduce spam. Learn how your comment data is processed.